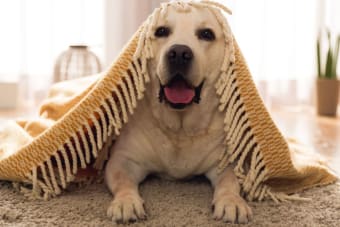 Pancreatic cancer is relatively rare in dogs, but this is why it's important to know the symptoms so that treatment can begin early to try to address this disease. Today our Gaithersburg vets explain the types of pancreatic cancer seen in dogs.

Your dog's pancreas is located near the start of their small intestine and performs two crucial functions:

Symptoms of Pancreatic Cancer in Dogs

If your dog is diagnosed as having a pancreatic tumor it means that the cells within a specific part of your pup's pancreas are overproducing (reproducing excessively). As with most tumors in animals and people, your dog's pancreatic tumor could be either benign (non-cancerous) or malignant (cancerous).

Sadly, in dogs malignant pancreatic tumors are more common than benign, however, both are relatively rare. The most common form of pancreatic cancer seen in dogs is insulinoma, followed by adenocarcinoma.

The different forms of pancreatic cancer in dogs will produce a host of different symptoms. If your dog is displaying any of the symptoms listed below it's important to get your pup to the vet for an examination as soon as possible.

Insulinoma tumors lead to the excessive production of insulin when there is no food in the stomach to trigger its normal release into the bloodstream. As a result of the unnecessary insulin, blood sugar levels are reduced and your pet will experience symptoms such as:

Because the early signs of adenocarcinomas in dogs are vague this form of pancreatic cancer is rarely diagnosed until the disease has progressed.

Symptoms of adenocarcinomas in dogs are much the same as the symptoms of pancreatitis (inflammation of the pancreas) and include:

If the cancer has spread to other areas of your dog's body (which is common with this form of cancer) you may notice symptoms such as breathing difficulties or lameness.

Pancreatic tumors can be challenging to diagnose. Besides being a relatively rare condition, the symptoms associated with these tumors often come and go. To further complicate the matter these symptoms are also indicative of other more common conditions in dogs.

When you take your dog in for an examination your vet will take the time to ask you questions about your pup's medical history and do a thorough physical examination.

If your vet suspects that your dog may have pancreatic cancer they may refer you to a Veterinary Oncologist for further testing and treatment or recommend one or more of the following diagnostic tests:

Pancreatic tumors commonly metastasize (spread to other parts of the body) before the disease is detected and diagnosed in dogs. For that reason, once pancreatic cancer has been diagnosed your vet may wish to do further tests to determine the extent of the disease, if the cancer has spread, and to where.

Although pancreatic cancer in dogs tends to spread to their nearby liver or lymph nodes it could reach almost any part of the dog's body including the lungs, bone, or brain. In some cases, fluid build-up is identified in the chest or abdomen causing breathing problems or an engaged abdomen.

Tests that your vet may recommend to determine the 'stage' of your dog's cancer could include:

Progression of Pancreatic Cancer in Dogs

Alongside the very real concern about the cancer spreading to other parts of your pup's body, there is the issue of damage to the pancreas caused by the growing tumor.

Treatment for Pancreatic Cancer in Dogs

In the case of insulinomas, surgery to remove the diseased section(s) of the pancreas followed by chemotherapy is typically considered the best treatment option. If surgery is not an option your vet may try to manage your dog's low blood sugar symptoms through a special diet combined with medications to suppress insulin secretion.

Although it comes with potential risks of life-threatening complications, surgery is considered the most effective treatment for adenocarcinomas. Your dog's surgeon or veterinary oncologist might remove all or part of the pancreas, and sometimes the procedure will necessitate removing a portion of the small intestine will also be removed. In the case of adenocarcinomas, chemotherapy tends not to be an effective treatment.

The Prognosis for Dogs with Pancreatic Cancer

Unfortunately, pancreatic tumors tend to be malignant. This means that there is a high probability that cancer has spread even before diagnosis has occurred, making the prognosis for dogs with pancreatic cancer poor.

Your vet or veterinary oncologist will be able to tell you a prognosis for your dog based on the type of tumor and results from staging tests, among other factors. Your vet team will support you and your dog throughout treatment and disease management.

Note: The advice provided in this post is intended for informational purposes and does not constitute medical advice regarding pets. For an accurate diagnosis of your pet's condition, please make an appointment with your vet.

If your dog is showing symptoms of pancreatic cancer contact Veterinary Referral Associates right away to book an examination for your pup. Our experienced veterinarians can help treat pets with cancer diagnoses.