Dog Nail Problems You Should Know About 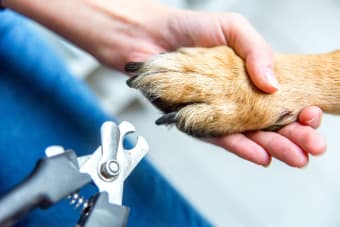 Are your dog’s nails looking a bit unusual? Do they seem to be licking at their paws or chewing at individual nails more than usual? If so, your pet may be exhibiting symptoms of a possible nail disorder or problem. Today, our Veterinary Referral Associates vets will discuss some common nail problems that your dog may encounter.

About Nail Problems In Dogs

Dog nail problems can come in many forms, with many symptoms, and can be caused by a problem in the nails themselves, or it may be a clue to a larger skin issue. Nails, after all, are an extension of the skin.

If you suspect your dog has issues with their nails, your dog may need to see your Veterinary Referral Associates vets right away.

There are many causes for your dog's nails to become infected or problematic. These are some of the most common causes:

Ingrown nail: This may be a result of a dog that doesn’t like his or her nails trimmed, thus making it difficult to keep up with regular nail care. It may also be seen in older dogs due to an increased rate of nail growth associated with aging.

Nail Trauma: If a nail is broken or traumatized, they may lick the area later that day or the next day to help soothe the area. Excessive licking of a paw or lameness can be associated with nail trauma. Some dogs may not like the paw being handled if a traumatized nail is making the area sensitive.

Bacterial Nail Infections: Bacteria claw infections are usually secondary to an underlying cause, so when only one claw is affected, previous trauma can be considered. However, if more than one nail is affected, various conditions can cause bacterial nail bed infection.

Food allergies and/or environmental allergies would be the most common cause of such infection. Allergies may also lead to a yeast infection of the nail bed. A general term used for inflammation (with or without infection) of the skin around the nail is Paronychia.

Fungal Nail Infections: Dermatophyte fungus (ringworm) can cause crusting of nails and surrounding skin tissue, making for unhappy-appearing nails. A solitary nail may be affected or the condition may affect multiple nails as well as the rest of the skin.

This fungus is more commonly a problem in cats, although dogs can also be affected. A yeast paronychia is common in allergic dogs, as mentioned above. Onychomycosis is a term used for fungal infection of the nail.

Lupoid Onychodystrophy: This condition is an immune-mediated nail disorder that can result in a variety of nail-related symptoms such as misshapen nails, brittle nails, thickened nails as well as nail loss. Though it is not a very commonly seen condition, some breeds such as Young German Shepherds and Rottweilers may be predisposed.

Initially, when one nail is affected, trauma can be blamed as a cause for the problem, but usually, other nails also get affected indicating that trauma alone may be too big a coincidence if nail issues are becoming recurrent. If additional symptoms are present, such as skin crusting, it is likely not lupoid onychodystrophy.

If your dog's nails are looking funky and you are concerned please contact our Gaithersburg vets for a consultation.